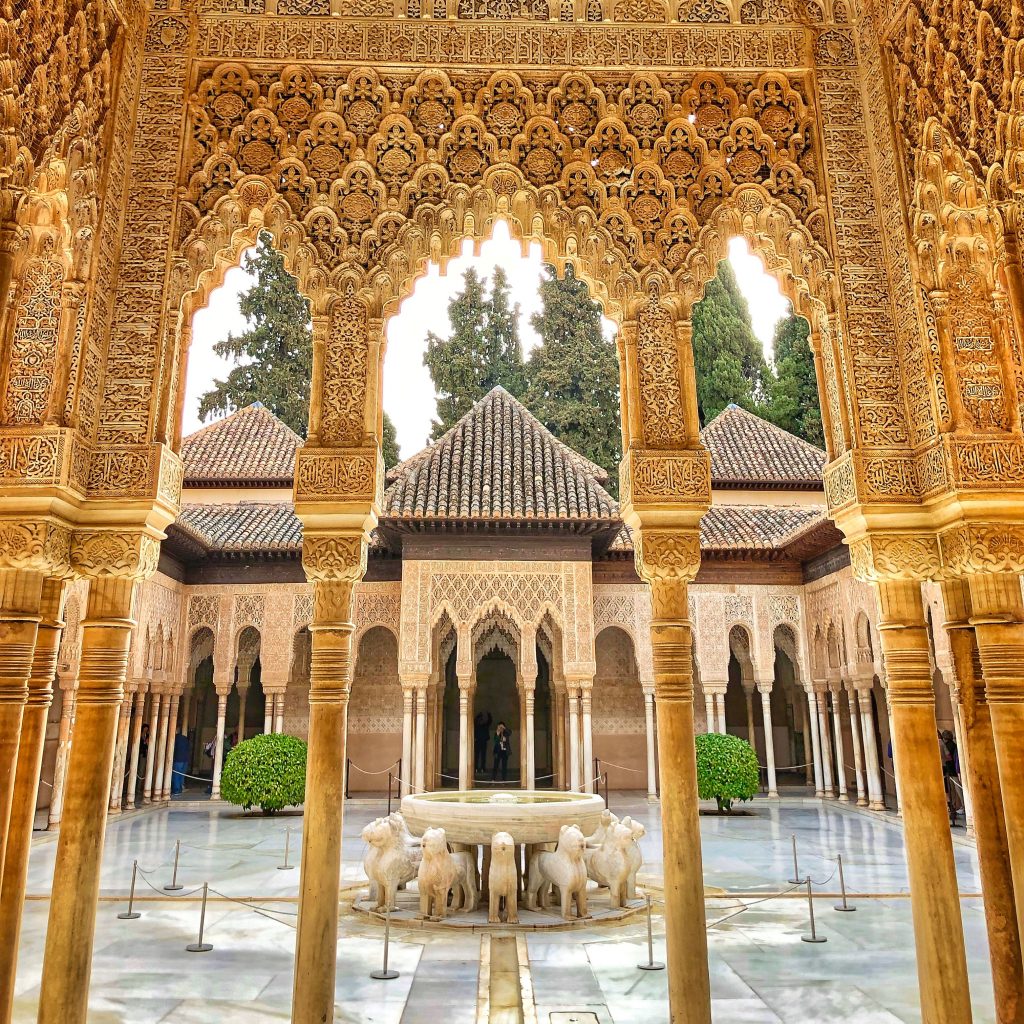 Discover the legacy of Spain’s powerful Nasrid dynasty on a private tour of the UNESCO-listed Alhambra Palaces and Generalife Gardens in Granada. From Moorish sultans to Catholic kings, hear stories from the centuries of rulers who occupied this stunning royal complex and adjacent gardens while an official guide reveals the secrets behind their multicultural history and design.

The Alhambra is broken up into sections: the Generalife Gardens (a collection of courtyards, pools, and fountains). The 13th-century Generalife served as a summer retreat for Nasrid kings when they needed a break from palace affairs. From its perch on Cerro del Sol (Hill of the Sun), the series of terraces, promenades, and gardens spread across 74 landscaped acres (30 hectares) of the Alhambra complex afford some of the best views over Granada.

And the Alhambra Palaces are a sprawling complex of intricately decorated palaces, pristine gardens, and a once-mighty fortress. This UNESCO World Heritage site was constructed during the Nasrid Dynasty and later partially destroyed and rebuilt by King Charles V. With its mix of Renaissance and Moorish architecture, the Alhambra Palace is the most sought-after attraction for visitors to Granada, sitting high on most must-see lists for Andalucia and Spain as a whole.

In this bespoke exclusive experience you choose and design your tour. From couples to groups of friends or larger groups, we have the tour you are looking for, just let us know what are your interests and needs, and we’ll send you different options including prices and timing.

Please let us know what kind of tour you want to do, so we’ll send you some great options. Either your group is only two or 30, we have different options for you!

EXCELLENT Based on 641 reviews.
Simona R
Amazing experience with so much insight! We had a tour with Victor where he showed us around the Málaga center and told us all the goodies! It was such an interesting tour with so much inside information. I have lived in Málaga for two years and yet, I didn’t know where the oldest restaurant with authentic food was located. I discovered artistic things I had never even seen. The city and its monuments just got a whole other meaning! It really made me fall in love with the place even more and I learned about history and some things that still make me laugh inside. Really recommend “We love Málaga”. It was awesome!
Alans-Malaga
Great evening tour through Malagas old city It was a great tour through the old city of Malaga and the and the very interesting stories behind the places and buildings we had seen. A very interesting and informal tour which was very well entertained. Thanks a lot to Victor!
Thibault L
Great Visit of Malaga Excellent tour of the city with Victor. His knowleges are huge, he never hesitated at answering any kind of question. I still have learnt a lot on this city I already knew for several months. Thank you Victor, the tour was great 🙂
Maggie
Amazing The best tour of Malaga! I learned a lot of new things about this amazing city and its culture. Victor is very charismatic and experienced guide.
Nina F
Excellent walking tour Super awesome and interesting walking tour! Victor took us around town and shared many interesting facts about Malaga.
Natalie S
Gourmet Tapas Tour Myself and my daughter did the 'Gourmet Tapas' with Viktor. He was spot on time at the meeting point which I appreciate. Viktor was full of knowledge and informed us of interesting facts and historical stories of the town. The tapas were plentiful and we had some lovely wines too. My daughter doesn't drink alcohol but he made sure that she had some special non alcoholic beverages. Viktor was very friendly, fun and interesting. I would highly recommend this tour, it was well worth the money 😉
Cristina
Tour por Málaga Hice un Tour con la empresa We Love Málaga por el centro de Málaga y fue una experiencia inolvidable. Una ciudad muy bonita donde aprendí con el excelente guía muchas cosas. En el Tour pude descubrir los monumentos más emblemáticos y su historia, sitios gastronómicos... Fue muy ameno y muy completo. El guía fue Víctor: un gran profesional con grandes conocimientos, súper simpático y con un trato excepcional. Repetiría con él sin duda. Recomendable 100%. Lo pasé genial. Muchas gracias por todo.
Brit Stenfeldt
Hyggelige og indsigstfulde aftentimer i Malaga. Dejlig to timers gåtur gennem Malagas gader med vores guide Paco. Indsigstsfulde og spændende kulturelle fortællinger blandet med udpegning af små finurlige spisesteder. Vi startede kl. 19:00, så ingen udfordringer med varmen. Kan varmt anbefale “We love Malaga” tours. Vi kommer bestemt tilbage til Malaga.
StaciMcFlo
Loved Paco and our walk through the old city We had two friends come with us, and they were warmly welcomed to our tour. Paco's intimate knowledge of his city made it so fun to walk around with him. We learned a lot about this area: the history, the people, the food! Loved our walk through the market. We had a true camera bug with us, and he was so sweet to wait for her when she wanted to take a picture and to take her to interesting places for more. We went back to the restaurant he recommended and spent 2 hours talking and laughing while the proprietor kept bringing us more treats. We couldn't have chose better for our visit!!
Sportbloger
Malaga Walking Tour Victor treated us to a 2 hr tour of Malaga that ended far too soon. Fascinating history, culture & landmarks. His intimate knowledge of the city, past and present, delivered with pride, charm and gentle humour throughout. A fabulous introduction to this wonderful city.
Let's get in touch
Facebook Twitter Youtube Tripadvisor Instagram
Let's get serious

This website uses cookies to improve your experience while you navigate through the website. Out of these cookies, the cookies that are categorized as necessary are stored on your browser as they are essential for the working of basic functionalities of the website. We also use third-party cookies that help us analyze and understand how you use this website. These cookies will be stored in your browser only with your consent. You also have the option to opt-out of these cookies. But opting out of some of these cookies may have an effect on your browsing experience.
Necessary Always Enabled
Necessary cookies are absolutely essential for the website to function properly. This category only includes cookies that ensures basic functionalities and security features of the website. These cookies do not store any personal information.
Non-necessary
Any cookies that may not be particularly necessary for the website to function and is used specifically to collect user personal data via analytics, ads, other embedded contents are termed as non-necessary cookies. It is mandatory to procure user consent prior to running these cookies on your website.
SAVE & ACCEPT

If you’ve got a curious traveler in your life, our gift certificate is the perfect gift. Food Tour, History Walk, Virtual Tour or Private Experience. You can gift any amount you’d like, and our gift certificates never expire, making them a great option for someone who hasn’t even booked their plane tickets yet!